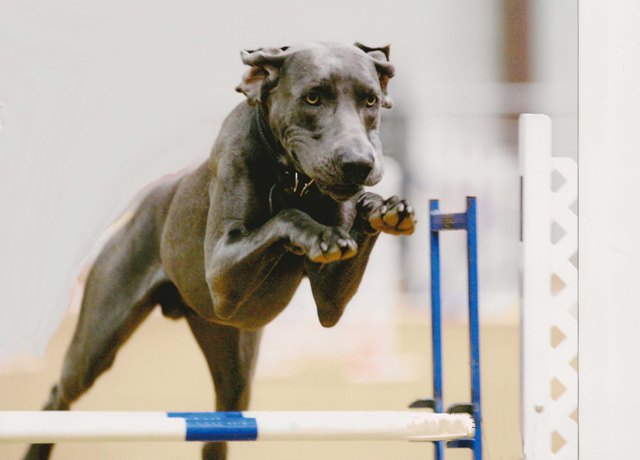 Cooper and I earned qualified both days which earned us two Advanced legs. The courses were so extremely tough that only 4 of us qualifed at the advanced level.

Bags are packed, Cooper is loaded in truck.   ROAD TRIP.  5hours later, we arrive in south Louisiana.   Saturday morning, 57degrees outside.  Cooper is more excited when he sees the sugar cane fields.  I could read his mind. “Boy I wanna pee on each stalk.”    Jumpers course is first.  My nerves are starting when I see the bars raised to 24inches.   Lets Do it Coop.   Cooper was on fire!  We had beautiful graceful switches, and turns.    Grabbing our leash, I glance quickly  at the course to see how many bars down.  NONE!!!!  Good boy Cooper!!!!!  thats our second Jumpers leg.  Bonus was we took first place!!!!!

Later that day was our standard course.  Watching all the dogs in front of us, we saw lots of mistakes.  People were making blind crosses, losing their dogs, lack of communication.  I kissed Cooper on his head and said lets have fun.  We had a beautiful course going till we hit the dog walk.  For once, I was ahead of him and there lies my mistake.  I was too far ahead of him.  He got all four feet on contact  but slipped off.  Judge tells us to move on.  The rest of our course was beautiful.  Even had a cross behind at the weaves.  Lots of praise came from our fellow competitors.  We were informed that we looked like a team and did things many people struggle with.  I was proud of my boy, but ticked off with myself for rushing ahead of him.   Then again, thats part of learning.  A great fact is what we do perfect at the practice field, may not be there at the show.

Second Day-  Jumpers is first again.  Once again it was a beautiful course.  ….  do you sense a “Till”?  It was a beautiful course TILL the last jump.  As Cooper jumped the last jump he turned his head to see where I was….    Down come the jump..  which seemed to happen in slow motion.     dang it.  I was running as fast as I could. Telling Cooper what a good boy he was, I quickly reminded myself that I had to run again in 10mins on the standard course.    We were first in the ring for standard.  Once again, kiss Cooper’s head and say lets do it man.  I got a three jump lead out. JUMP! JUMP! JUMP!  boy he is flying.  slams to a stop to hit the weave entry.  perfect.  See Saw, ….  Come on Cooper….Last one…TIRE!      FLAWLESS.    I drop to my knees and Cooper is all over me jumping and kissing.  Crowd was cheering.  Cooper took first place with his first qualifing standard leg.

We are in a horse arena for this show. Lots of birds and kids running around as great distractions.  Our first run, is jumpers.  There were several 180 turns and Cooper was running full speed. The turns were too close for him to get the tight turns so two jumps came down.  Standard course is next.  We had a beautiful run. He touched the contacts with all four feet.  He came to a stop so he could get the weave entries. We’re at the last three jumps. I yell GO GO GO.  PERFECT…. We earned our second standard leg and second place!   Sunday’s courses were just ugly.  During our jumpers course we had a train right behind the building.  For the last standard run, Cooper and I were just burnt out.  I was ready for home and let him go swim in the pond.

Saturday’s course was so easy, I was over confident.  Well Cooper had other plans.  The building had tons of good smells for him to sniff.  The judge looked like a friend so we had to visit her. (ugggh!)  So I shrugged it off and blamed the four and half hour travel.  Sunday, we were focused!  We earned our RALLY ADVANCED TITLE in front of a very big crowd.  Since we were in my parents home town, they came to watch.  My dad didn’t have a clue about Rally, but when we finished he clapped the loudest.  They saw Cooper and I’s first rally show and now they saw our advanced title win.  Cooper got some steak that night.